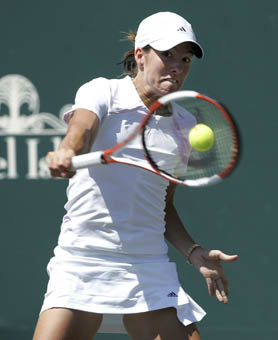 Justine Henin is a professional Belgian tennis player who has had phenomenal success on the tennis court.

Justine Henin was born June 1, 1982 in Liège, Belgium to José Henin (father) and Françoise Rosière (mother). She has two brothers (David and Thomas) and a sister (Sarah).

Justine started to play tennis when she was 2 years old when the family moved to a house next to a tennis club. As a kid she was a very good soccer player and a brilliant student.

In 1995 when Justine was 12 years old her mother died. Shortly after her death Justine met her coach Carlos Rodriguez who has guided her tennis career ever since. After a conflict with her father regarding her tennis career and her relationships with Pierre-Yves Hardenne, Carols has been a second father figure to Justine.

Justine plays mostly from the baseline. She can hit powerful, consistent, topspin forehands and backhands. Her single handed back hand, which is rare in professional tennis these days, is considered to be one of the best in the sport. She can hit top spin, slice and flat back hands with pace and accuracy. However, her forehand is considered to be even more of a weapon. Justine has a compact swing on her forehand, but can generate spin, power and placement on her forehand consistently.

Although Justine is known for her attacking tennis she is also a good defensive player when required. Her foot work and court coverage is phenomenal. She can rundown and return difficult balls in defense, and attack as soon as she gets an opening.

Justine is a complete tennis player. In addition to having great ground strokes, she also has a good powerful serve and good to exceptional volleys. Henin started to serve and volley more towards the latter part of her career.

Justine Henin’s accomplishments as a professional tennis player are very impressive. She has: 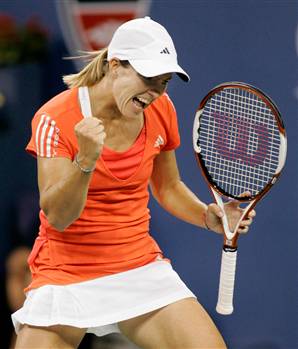 Here are some of her career highlights so far.

As a junior Justine won the junior Girls Singles title at the 1997 French Open.

She began her professional career with a wild card entry to the Belgian Open in the Women’s Tennis Association (WTA) tour in May 1999 and became only the fifth player to win her debut WTA Tour event.

2003 was Justine’s year in Women’s tennis. She won her first Singles Grand Slam at the French Open defeating Kim Clijsters in the finals. This was Belgium’s first Grand Slam win. Later that year she won her second Singles Grand Slam Tournament at the US Open and became the World Number 2 player behind her compatriot Kim Clijsters. The Belgians were dominating Women’s tennis at this stage. Henin won five other tournaments that year. She finished the year as the World Number 1 player for the first time.

Justine had a good start to 2004 wining the Australian Open. But at the start of the 2004 spring clay court season her health was badly affected by a virus (cytomegalovirus) and an immune system problem. She often slept up to 18hrs a day. She decided to defend her French Open title but lost in the second round to a much lower ranked player. After months of layoffs Justine returned to competition in August to win the Summer Olympic Gold Medal for Women’s Singles in Athens, Greece, defeating Amélie Mauresmo of France in the final. This was the only Belgian Gold Medal at Athens. Henin considers this victory to be her most beautiful victory in her career.

In 2005, the Tennis Magazine placed Justine in 31st place on its list of the 40 Greatest Players for the period 1965 through 2005. In November 2005, at the WTA Tour Championships, she was named the inaugural winner of the Whirlpool Sixth Sense Player of the Year, which honors the player who has demonstrated the most sixth sense intuition which means “heightened intelligence, unbeatable performance and pinpoint precision”.

In 2006, at the Australian Open final against the Amélie Mauresmo, Henin retired after trailing 6–1, 2–0, citing intense stomach pain caused by over-use of anti-inflammatories for a persistent shoulder injury. She was criticized by the press as she stated that she was in “peak of her fitness” and playing the “best tennis of her life” after her semifinal win over Maria Sharapova. This was only the fourth Grand Slam women’s singles final to end by retirement since 1900 and the first in the open era.

At the 2007 Wimbledon Semifinals, Henin lost to Marion Bartoli 1–6, 7–5, 6–1. Henin won the first set and was up a break in the second set at 1-0 and 4-3 but could not hold her lead. This match is described as one of the biggest upsets in Wimbledon history. In the year end WTA Tour Championships Henin beat Maria Sharapova in a three set match that lasted 3 hours, 24 minutes. This is the longest match in this tournament and Henin’s longest match. It is the 12th longest women’s match ever. In 2007 Justine also became the first Woman to pass the US$5 Million a year barrier in prize money. By crossing US$19 Million in overall price money, she is ranked 5th in the all time price money list.

In the start of 2008 Justine Henin withdrew from several tournaments due to injury and fatigue. She also lost easily to several opponents.

On 14 May 2008 Justine announced her immediate retirement form professed tennis. This came as a surprise as she was still the World Number 1 and the favorite to win the French Open Championships she won the previous year.

On 22 September 2009 Henin officially announced that she is returning to competitive tennis. Her intention is to play competitively till the 2012 Summer Olympics in London.

Justine Henin had a great run at the 2010 Australian Open – her first Grand Slam tournament after returning from retirement. She reached the finals losing to World #1 Serena Williams 6-4 3-6 6-2.